Why school districts are not held accountable to enforce IDEA

When Congress revised the IDEA in 1997, it expanded the opportunities for Local Educational Agencies and State Department of Education to enforce the provisions of the IDEA and increased the rights of parents and children.

First, the revised Act added mediation to the possible procedures for resolution of disagreements. Mediation offered a voluntary alternative remedy to the due process hearing.

The IDEA included provisions that the mediation would be conducted by a certified mediator, it would not be used to delay the due process hearing, the decisions would be in writing, and the state had to bear the cost of the mediation.

Second, the revision preserved due process protections by requiring parental consent for initial evaluation and placement in special education. Under the revision, parents retained the right to challenge educational decisions through impartial due process hearings. This increased parent rights substantially.

Congress revised the IDEA again in 2004 and expanded it to include new provisions for the determination of special education eligibility with a particular emphasis on early intervention services.

The revised Act also added a law that allows for school districts and states that prevail at due process hearings to recover attorneys’ fees against parents when the complaints are “frivolous, unreasonable, or without foundation.” Critics predicted that this change would have a chilling effect on parents and advocates who sought to bring due process hearings to remedy a denial of FAPE (Free Appropriate Public Education).

So essentially, although the 2004 reauthorization of IDEA strengthened parent rights in the decision-making process, it was also a setback for parent rights. The new act served as an intimidation tactic causing parents to be afraid to file due process by putting themselves at risk of being held accountable for school district attorney fees if their case was found to be frivolous.

In addition, Congress added two mechanisms to encourage settlement of due process claims before hearing.

First, Congress made mediation an available choice for parents to address all issues arising under the IDEA.

Second, for claims that were not mediated, Congress added a mandatory “resolution session” for all parties bringing due process claims. Before claims can proceed to a hearing, the parties must conduct a resolution session, which is an unmediated, legally binding settlement conference.

These mechanisms were meant to decrease the number of claims decided in due process hearings. Although special education law has expanded to include more avenues for remedies for a denial of FAPE, parents have limited access to these avenues because parents’ limitations depend on financial wealth to afford due process, knowledge of rights under IDEA, and education level to understand and navigate the system.

These barriers limit parents’ ability to enforce their rights and access the provisions of the IDEA.

When we look at Federal enforcement, we have seen it has proven to be ineffective because it is rarely implemented. Although the National Council on Disability has found that all states are in some form of noncompliance with the IDEA, OSEP (Office of Special Education Programs) has suspended funds from a state only once since the creation of the IDEA.

In 1994, OSEP moved to withhold funds from the Virginia Department of Education because the state submitted a discipline plan that was in direct violation with OSEP policies. Virginia’s plan allowed for the state to stop providing educational services for children with disabilities who were expelled. This plan violated the OSEP policy to continue to provide FAPE to all children until the child graduates or turns twenty-one. OSEP suspended the state’s funds because Virginia refused to amend the plan. This is the only instance where OSEP withheld funds from a state.

Although the Department of Education repeatedly advises states to make changes, it is not enforcing consequences, even when states do not rectify problems year after year.

Therefore, Federal enforcement of the IDEA is ineffective to ensure that all children with disabilities receive FAPE.

Congress created further steps to address noncompliance and the barriers that limit parent advocacy. Conversely, these levels of parent enforcement each have barriers that prevent the universal implementation of the IDEA across the country.

A parent may file for a due process hearing when a child has been denied FAPE. Compliance complaints allege a school district’s violation of the IDEA, while due process hearings aim to resolve disputes about the IEP and the provision of FAPE.

In terms of the due process option, parents who can afford legal representation have difficulty finding it because the majority of lawyers in private practice in the United States work in law firms that primarily represent school districts rather than the student.

Those lawyers who are willing to represent parents are often too expensive for the average family. The only way for parents to recover attorney fees is if the parent files for due process.

This does not give parents an option to obtain legal assistance in the IEP process and many parents are not comfortable or feel ready to file for a hearing or choose the mediation option. Although the IDEA allows parents to recover attorneys’ fees in due process, the prospect of recovery does not provide a strong incentive for attorneys because fees are only awarded to prevailing parties.

The due process system is a weak mechanism for enforcement of the IDEA as long as these barriers exist. Parental advocacy is weak across the country because parents do not know their rights under the IDEA, do not feel competent to be equal team members, have anxieties about bringing due process claims, and cannot get legal assistance.

A review of Department of Education monitoring reports finds that enforcement of the IDEA is largely the burden of parents due to the failure of federal and state enforcement.

Therefore, although Congress created efforts to improve parental use of the due process system to attempt to enforce IDEA when state and federal enforcement mechanisms fail, compliance complaints, mediation, and due process have proven to have significant barriers that prevent its effectiveness for widespread enforcement. 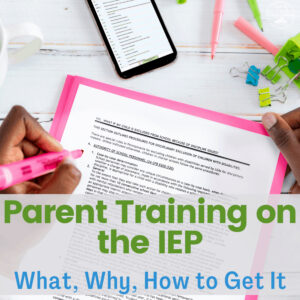 In closing, the only viable option for parents is to choose parent training by an experienced and highly trained advocate.

When parents educate themselves to understand the IEP process and protect their rights during special education team meetings, they decrease the need to file for due process.

Unless a parent knows when the school is out of compliance, understands how to create a legal paper trail to hold the district accountable to state timelines, understands how to interpret assessments and write appropriate IEP goals, parents are at the mercy of the IEP team and are at risk of being taken advantage of according to their level of knowledge and ability to navigate the system.

If you’d like to find out how you can increase your knowledge so you can hold your school accountable to meet the needs of your child, schedule a consultation here.

Here’s to your advocacy success!

If you haven’t joined our Private Special Education Parent Empowerment Facebook Group yet, you should check it out here.

Here’s what parents are saying about the group:

“True advocates fight from their core. You are a great inspiration.”

“I love your posts and all the great advice and information! Thank you so much!”

Want helpful tips to guide, motivate and inform you to become a successful advocate for your child delivered right to your inbox?

Register today and find out the Top 10 Mistakes Parents Make that May be Costing You Services for your Child!

Want helpful tips to guide, motivate and inform you to become a successful advocate for your child delivered right to your inbox each month? Register today and as a FREE BONUS you will receive the Top 10 Mistakes Parents Make Guide written by Valerie Aprahamian!

Want helpful tips to guide, motivate and inform you to become a successful advocate for your child delivered right to your inbox?

Register today and as a FREE BONUS you will receive the The Top 10 Mistakes Parents Make that May be Costing You Services for Your Child Guide.